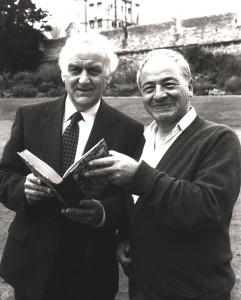 Colin Dexter, creator of Inspector Morse, died at his home in Oxford on 20 March, 2017, aged 86. Although he started writing rather late – he was in his mid forties – and as a kind of extension of his preoccupation with crossword setting for The Times, he achieved the devotion of denizen’s whodunit fans. His readership grew considerably with the ITV television adaptations with John Thaw as Morse from 1987 to 2000. His willingness to engage with his fans in an entertaining and humorous manner further enhanced his reputation. All of this made Dexter rather different from other crime writers.

Prior to establishing Scorpion Press as a crime publisher of collectible books I had noted the admiration of crime buffs for the Morse novels and had worked with Macmillan to have signed copies of his books when published. In 1991 the long waited new Morse – The Jewel That Was Ours – was issued not only as trade edition, but as a beautiful red leather edition of 150 copies. It contained an appreciation by the President of the Detection Club H R F Keating. Mr Keating delighted in describing the virtues and idiosyncrasies in the books. First, was Oxford. Not just the obvious confines of the regal buildings, high table, and the staff room; but the rough and tumble of ordinary places. Dexter’s Oxford was a Dickensian world of humanity with a past. That brings us on to his huge knowledge of the byways of English Literature. He likes to link his narrative in some way to a place, maybe a village or woods, as a setting that speaks to us of literary allusions. And, Harry Keating naturally honoured the author with his canny understanding of the Morse/Lewis relationship; in reality the key ingredient.

The rapid sale of the entire 150 Scorpion Press collectors edition of Jewel, followed by The Way Through the Woods in 1992 enabled the small press to flourish and attract other big 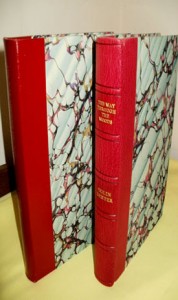 names. The doyens of the crime world such as Harry Keating and Julian Symons suggested other writers of note. In a short time Dick Francis, Len Deighton and Ruth Rendell were in Symons’ phrase “Scorpioned”.

We found Colin Dexter to be easy going and well read. He liked to tease and make remarks that caught you off guard. He once said “How do find hard boiled fiction?” He seemed to imply he had found a new affection. He would hum a tune or phrase from classical music as he signed the pages for us in his Oxford home. And then ask us about educational standards. I kept in touch by letter for many years, but for some years now his eye sight was failing.

During the 90s while he was active Colin Dexter was especially friendly with a small group of fellow writers that shared interests or outlook on life. He liked Mike Ripley for his humour and his knowledge of good beer. Then Jonathan Gash shared an interest with Colin in language and the use of words. But it was the reading public that were his friends too. He loved to attend functions or conventions to give a speech. His talks were spell binding. Full of asides and wry smiles. His books will live on. His ingenious puzzles savoured.

Have Something To Say ?