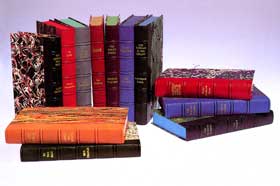 From the beginning the press decided to include four elements: all books were autographed by the author (or authors); additional material was commissioned about the author; print runs were kept very small (truly limited); and finally the books drew on traditional craft book-binding skills, but had a modern appearance because of a high degree of opulent colour co-ordination. 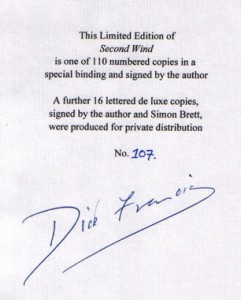 The author’s signature is now fairly commonplace because writers are obliged to conduct book promotion tours. Before the 1980s it was difficult, if not impossible to find a signed book by a well known author, still less it being offered for sale. Most were inscribed to a friend or relative, and therefore keep in the family. Book collectors value the signature but they should be aware that some signatures are more desired or scarcer than others; if an author lived overseas or had a sufficient reputation that he/she did not need to tour; then the autographed signed limited edition came into its own. Also, the occasional anthologies of short stories address this need. Five have been issued in twenty years. Two were edited by the foremost British grouping of detective writers known as the Detection Club, another was to celebrate the Bouchercon crime convention held in Nottingham, England in 1995, another was a British Crime Writers’ Association anthology with a tribute to three time CWA Gold Dagger winner Lionel Davidson, and finally a ‘what happened next’ collection of tales about a charm devised by American thriller writer Karin Slaughter.

One of the advantages of a private press is that it can tailor the product to the liking of the discerning fan and collectors by adding material. Scorpion Press has generally done this through commissioning an appreciation of the author by a writer of note. The essay may offer enthusiasm for the book or body of work, pass on insights on the key elements as well as concerning the skill of the practitioner. The publisher has on many occasions selected a writer who shares a literary affinity with the author, for instance, Julian Symons on Ruth Rendell, Len Deighton on Ted Allbeury, Ellis Peters on Lindsey Davis or Jonathan Gash on Colin Dexter. For some projects artwork has been commissioned – the Detection Club’s The Man Who … had an illustration and the tribute book to Dick Francis and Lionel Davidson had pictorial endpapers featuring incidents from the novels.

For many years private presses have issued special editions with runs of no more than 100 copies. All books being individually numbered and usually signed. When the enterprise began it decided on a norm of 99 copies with some additional presentation copies for the author etc. In exceptional cases it did a larger run, or sometimes rather less. Gradually over the years it reduced the run to 85 or 80 numbered copies, and in the recent period the run was reduced still further for newer authors. 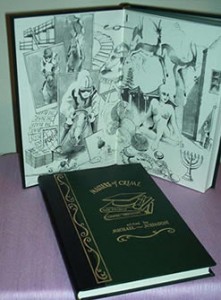 Most of the books have a distinctive look – being colour coordinated with subtle or striking colours, devised around a leather spine, marbled paper over boards, coloured top edges and patterned coloured endpapers. The marbled papers are hand-made, sometimes to specifications set down by the press. Machine-made marbling does not have the same vitality and eye-appeal of the human controlled marbling process. Block lettering is usually in gold leaf. Should the press issue a second or subsequent book by an author it prefers to keep to the original design and colours.