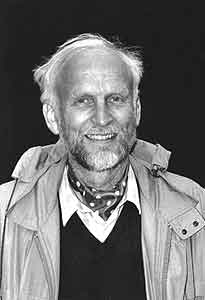 Reginald Hill, prolific British author best known for his 24 idiosyncratic, but highly elegant crime novels featuring the Yorkshire police detectives Andrew Dalziel and Peter Pascoe, is perhaps one of the most admired and influential crime writers of the last 50 years. The BBC adapted many of the books shown on British television between 1996 and 2007. The series with the avuncular Warren Clarke as Dalziel and the reserved Colin Buchanan as Pascoe has been an enduring hit. It was shown in the USA on PBS.

Oxford educated Reginald Hill taught in a further education college in Leeds and felt close to his Northern roots, livig as a full-time writer near the Lake District. He could be viewed as an early exponent of the “regional mystery” – able to bring together a genuine sympathetic ear for life in Northern towns with story lines about social change, and with a feel for the loss of identity as well as a sympathy for the emerging currents of feminism and sexuality.

The first novel in the series, A Clubbable Woman, published in 1970, established the prickly relationship between the blunt and earthy Superintendent Dalziel and his urbane and erudite young colleague, Sergeant Pascoe, who has had to live down his reputation as “a jumped-up, supercilious, intellectual twit.” Here the Superintendent is in his element mixing with the rugby fraternity, both male and female, while the aloof Pascoe looks on.

Incompatible by class, education and temperament, the partners have bickered over everything from the strident politics of Pascoe’s feminist wife to the interpretation of an Emily Dickinson poem found at a crime scene.
Mr. Hill made a formidable team of this ill-matched pair by balancing Pascoe’s reflective intelligence with Dalziel’s blunt pragmatism. Crude, rude “Fat Andy” is the Falstaff life force in these novels, while Pascoe is Prince Hal.

The later books are not primarily “Whodunits”, although the reader will be satisfied with the richness of the author’s guile with plots twists. After charting in Underworld (1988) the miner’s strike and its devastating affect on communities, Reginald Hill turned to rural life, environmental issues, and the encroachment of avaricious values. For him happiness was to be lost or found in such surroundings. This harked back to the Lake poets – and Hill took it to another level. Despite the horror of deaths at the start of Pictures of Perfection (1994), Sergeant Wield delves into another kind of perfection. While Dalziel and Pascoe keep well out of the picture. Another depiction of paradise is found in On Beulah Height (1998). In a hot summer the bodies of several girls emerge as the water recedes in a reservoir. The investigation brings all kinds of past misdeeds to the surface. In this novel Peter Pascoe, now a more mature policeman confronts the possibility of losing his own daughters. A book ripe with emotive power.

Peter Lovesey, author of the Sergeant Cribb and detective Diamond mysteries began writing at the same time as Reginald Hill. They knew each other well. Lovesey penned a marvelous appreciation of Hill for the Scorpion edition of Recalled to Life (1992). He recalls with reference to A E Houseman, “the blue remembered hills” or Hills. His admirers also included the present and previous President of the Detection Club – Martin Edwards and Julian Symons; the popular Canadian mystery writer, Louise Penny; and American writers such as the late Walter Satterthwait. His influence is to be found in today’s popular writers such as Stephen Booth and Ann Cleeves.