This is a tribute to those that influenced me as a collector, bookseller and publisher over the last 30 years.  Long before I began publishing in 1991 I was a dealer in modern first editions; a precarious occupation for the term was an elastic one, ever changing to include non literary genres such as fantasy, SF, Children’s books and Crime. Guides to collecting such as Joseph Connelly’s Modern First Editions (1977 followed by numerous revised editions) had pushed the boundaries far from the old pre-war fiction, recommending writers of wit and satire such as P G Wodehouse, George Orwell and Evelyn Waugh and on to more contemporary writers like Kingsley Amis, Anthony Burgess, William Golding. Invariably it was the early books that commanded the best prices. But as each new edition of the Connelly guide came out one noticed some writers had been dropped and new ones appeared. Collecting the modern writers in first edition had become a game – you had to gather up the next big author’s rarities before they rocketed in price. 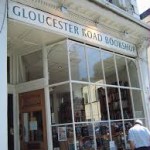 I began to collect around 1985 when I had a little spare cash and lived near the Gloucester Road in SW7. Looking back I would say that of the three main sources of books to fill ones shelves – the book catalogue, the book fair and the bookshop – the latter was much preferred. On my way home from work I would often go into the Gloucester Road Bookshop. I would ask Nick Dennys, the manager, if any new firsts had come in. They would be on the shelf at the back and invariably the good stuff had a “sold” note protruding. One of the plusses of the shop was the regular appearance of review copies. One of my finds was an unread review copy of Julian Barnes’s Flaubert’s Parrot. The real treasure was always put to one side for the mouth watering annual catalogue. The telephone line was always engaged, so the form was to ring in with at least six catalogue numbers in the hope of buying one or two items. One evening at the shop I made an important discovery. An old saloon car pulled up outside and two gentlemen got out the back. They were well dressed and sported brimmed hats. They entered and the shop promptly closed. Later Nick said that the shop was owned by Graham Greene and he and his brother came along to see how things were going. Much of the catalogue gems were from Mr Greene’s own library. He was a large influence on the shop in many ways. He was himself an inveterate collector of literary first editions. He was also a reviewer and had an eye for important novels. Much later when I knew Lionel Davidson he mentioned how he shared a passion for good literature with Graham Greene and that he was a keen fan of his thrillers. Part of their fascination with reading and collecting was they would store away material in memory that impressed.

Another London bookshop that I often visited by appointment was the Canonbury home of Elizabeth Spindel. She had a small but select stock. One of her favourite authors was J L Carr. She sold me his self-published paperback and told me the story of how Carr had fallen out with his publisher because of lack of sales. When his books were discounted (“remaindered” in the trade) he bought all he could and filled his home. He would give talks and sell his own books. His efforts paid off for his readers knew that this self made man believed in his work. On the basis of this recommendation I began to search and found one of the best undiscovered novelists of the English language. My Carr favourite is the A Month in the Country, but for thoroughly British charm and character the schooling novel The Harpole Report or the RAF cricket story A Season in Sinji are beautifully moving.

I had friends over in West Hampstead and I often visited the bookshop at Fortune Green. They were another old fashioned shop where you could find something of interest. About this time I had discovered American writers such as E L Doctorow, John Updike, Tennessee Williams, Eudora Welty and Nathaniel West. Few people collected them but this was the kind of place where you might them.

Later when I turned to buying and selling books I often sold to the up-market first edition dealers such as Rick Gekoski and Peter Jolliffe. For them it had to be a rock-solid author, fine condition (or nearly) and preferably signed by the author. Even better was a presentation inscription to another famous author. To find those kinds of books you had to have connections or were incredibly lucky. I was just lucky. For me it was about finding a book that the seller did not care for – perhaps was sick of the sight of it – and prepared to let it go with something left in it. I never met Rick for was a busy man, spending his time with clients, while his assistants bought the stock. Peter was a jolly fellow, not as broad a taste in collectibles as Rick, but quite able and certain in his choice of books to re-sell. He liked to buy the poetry books of R S Thomas from me. I would gather up the slim volumes with titles like Poetry for Supper and go over to Cardiff and get them signed. The presence of the signature made all the difference. Thomas was perfection for a modern first dealer: his stature was very high as a writer (Nobel Prize Winner), he had a dedicated following, many scarce titles and few knew how to get his signature. Finally, outside literary circles few knew who he was so you might find a bargain!

As my book business grew my regular customers often asked for certain books. One collector from Chicago had an eye for ‘the next big thing’. Wayne Schoderus asked me to stay in Chicago and he delighted in showing me the thrift shops and hide-aways where bargains were to be had. Wayne had over 3000 first editions. A good portion of these he had bought to trade-in for other books which dealers kept back. A good example of his expertise was his view on Cormac McCarthy, author of the classic cowboy novel All The Pretty Horses. Wayne said he was going to be big even though no one had then heard of McCarthy. He had scooped up all three of his previous books at reasonable prices. He added that when the price went sky high he would exchange them for Faulkners. Wayne recommended to me an unsuccessful Southern writer who had written three or four novels including The Last Get Back Boogie. He said some day he would be big! James Lee Burke had tried a couple of detective novels out with publisher Henry Holt. They did not sell. But I took Wayne’s advice and found a Florida bookseller who was selling The Neon Rain and Heaven’s Prisoners, US first editions, as new for $10 each. I bought boxes of them and had them shipped back to England. I would take them to bookfairs and astute collectors would buy; impressed with my knowledge of the market. The very next book which Burke brought out deservedly received the Edgar for Best Mystery. So here’s to Wayne who sadly died more than twenty years ago.

Wayne’s liking for James Lee Burke was a spur for me to write to him while he was touring asking if he would graciously like to be an author in my publishing venture for collectors. Although Mr Burke did not accept at the time he later agreed and has become a regular author. His stature is now as high as any writer but it took a while for his audience to grow and appreciate him. Another British collector recommended Ian Rankin before he was a best seller. Other enormous successes in the Scorpion Press series such as the Flashman novels of George MacDonald Fraser or the Sharpe books by Bernard Cornwell can be traced back to the influence of people like Peter Jol

liffe and Nick Dennys. They knew about quality and that some extra ingredient should be present that pulls collectors in. Likewise another well respected London bookseller Nigel Williams who supported Scorpion Press by regularly buying our new titles until his sad early death.

PS. Nick Dennys sold the Gloucester Road Bookshop but still trades as Dennys, Saunders and Greene on the internet. Interestingly he still stocks first editions by authors such as Tolkein. Wayne Schoderus passed away in 1993 and his collection was sold. Peter Jolliffe did much for the world of book collecting and became a partner in the Ulysses Bookshop near the British Museum. He was a regular customer of Scorpion Press books particularly authors such as Ruth Rendell and Bernard Cornwell. He died in 2008. The Fortune Bookshop, London is still trading.

Have Something To Say ?