What is Tom Wolfe’s America

From the early 20th century, for example the USA Trilogy of John Dos Passos, writers have given us contemporary portraits of America. One of the 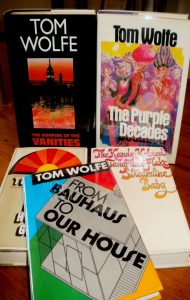 Wolfe was a wordsmith with style. His man-about-town appearance in publicity photographs, often dapper in a white suit and colourful necktie was a statement; he was a kind of cross between a successful business exec and an artist. Both with something to advertise. He began writing articles for prominent magazines in the 60s. The subject matter was serious but Wolfe had an angle . . . what is happening to America.

The articles were chatty, a non-fiction reportage that could leave you dizzy with its mix of styles and references. They told you about all kinds of social changes that had not yet been assimilated into mainstream. For example, in Wolfe’s first book, The Kandy Kolored Tangerine Flake Streamline Baby (1965) we find chapters on the new culture makers, heroes and celebrities, and New York life. A later and much larger volume of material, The Purple Decades (1982) explores a new kind of writing – a sociological exploration with humour of status in its various forms. One example is “The Mid Atlantic Man”: “the young English show-business figure, a singer, musician …. who goes American in a big way. A singer, for example, sings American rhythm and blues songs, in an American accent … studs his conversation with American slang, like, I mean you know, that’s where it’s at, baby”. Wolfe was remarking on the replacement of working people’s language with an imported universal triteness. In this way he was bringing his readers up short much as key cultural thinkers such as Richard Hoggart did in his study of British social mores The Uses of Literary.

But Wolfe was not just an observer or commentator, he brought us phrases such as “radical chic” and “the right stuff”. Tom Wolfe began The Right Stuff (1979) at a time when it was unfashionable to contemplate American heroism. Nixon had left the White House in disgrace, the nation was reeling from the catastrophe of Vietnam, and in the end of Carter years America had lost its way with the aborted mission to free hostages held by Iranian militants. Yet it was exactly the anachronistic courage of his subjects that captivated Wolfe. In his foreword, he notes that as late as 1970, almost one in four career Navy pilots died in accidents. “The Right Stuff,” he explains, “became a story of why men were willing – willing? – delighted! – to take on such odds in this, an era literary people had long since characterized as the age of the anti-hero.” The novel was all the better because it also gave the loved ones side of the story. The wives and friends waiting for the astronauts to return.

The Right Stuff was a turning point for Tom Wolfe. It was a best seller and later a movie. It was a work of faction based on real events. He had always stayed away from fiction. Then everything changed with The Bonfire of the Vanities (1988). An entertainment with a sharp cutting edge, it lampoons the rich of New York society with chapter captions such as “Master of the Universe” and “King of the Jungle”. It is full of hyper crazy figures filng outrageous lawsuits on each other – as they do when vanity is threatened and your real self exposed! Then came another blockbuster with A Man in Full (1998). Wolfe was not far off seventy now. His tale was about debt, honour and people sick with all kinds of trouble in the racially mixed Atlanta. It tells of owing debt in the millions – and is a foretaste of the great financial crash just ten years later. America now has Donald Trump, a figure that came to prominance because of the sufferings of that time. Wolfe’s America sometimes tells us rather too much.

As a bookseller in the 80s the only Wolfe book that was wanted was The Right Stuff. Other that one-off the earlier books did not sell. But everything changed with Bonfires. The significance of the novel was trailed in advance. The three copies of the signed limited edition that I ordered from the States all sold. The book changed the collecting fortunes of its author; anything signed – the earlier, the better – was wanted. Prices rose. The Kandy Kolored Tangerine Flake Streamline Baby, 1st US edition in fine condition and signed is often listed these days at around $1000!