A rare first edition of Evelyn Waugh’s Brideshead Revisited has sold at Sotherby’s auction for the staggering sum of £52,500. 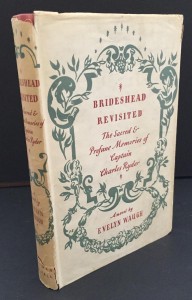 The popular novel, published in 1945, was one of 50 pre-publication copies issued by the author to friends asking for comments and revisions. This copy was given to Deborah Mitford, friend and Dowager Duchess of Devonshire, of Chatworth House, who died aged 94 in September 2014.

The price reflects the fact that this is a unique copy, symbolizing if you will, the long decline English aristocracy, and the end of an era. Brideshead’s popularity stems in part from the television drama which received acclaim and high viewing rating in the 1980s.

One cannot help but comment that Waugh association copies of his books inscribed to friends and members of his circle do come on the market fairly often. Nearly all his novels of the 1930s through to the Sword of Honour trilogy were issued in signed limited editions of some 250 copies. Added to this is the American editions, issued in a similar size, and can see that one of them are particularly “rare”. Nevertheless, his reputation, boosted by booksellers such as Joseph Connolly and Adrian Harrington has kept his first editions at the top of 20th century literature want lists.

Over the years I have had first editions of Bridehead. It was not particularly difficult to find. Fine copies – the collectors gold – was another matter. But whether they were only Very Good condition or better they all sold very quickly.

My own major “find” of a rare Evelyn Waugh was a nice copy of A Handful of Dust, Chapman & Hall 1934 first edition in a reasonably Very Good dust jacket. I sold it to the legendary bookseller Rick Gekuski for something like £425 in 1990. Now it would be worth at least five times that amount. And the Sotherby sale confirms that super Evelyn Waugh books are much prized!