Is Spy Fiction back? 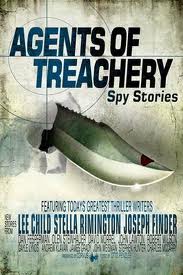 Since the mid 1990s espionage or spy fiction has been a thin market. The sinews of the Cold War and the games of misinformation played out by both sides had gone. Some writers (principally Furst and Wilson) successfully revived the historical espionage novel with authentic European settings during and after World War II.  In some cases they were police investigations into some event from the past. But the classic espionage novel had a sense of unease and something about the ethics of spying that spoke into our own times.  I recently came across a new collection of short stories commissioned by Otto Penzler, with contributions by fourteen authors and it purports to be the first collection of spy stories – other than archaic or mixed anthologies – such as Eric Ambler’s To Catch a Spy (1964).

The book was originally published in the United States and the selection reflects this bias, being mainly American or US resident writers. It contains two or three of the biggest names of American espionage in Charles McCarry, Joseph Finder and Stephen Hunter; and the editor has stories from thriller and screenplay writers James Grady (Three Days of the Condor), Andrew Klaven, David Morrell (First Blood creator of macho Rambo), Gayle Lynds (co-author with Robert Ludlum in the Covert-One series). Other thriller writers of appeal are Lee Child, Dan Fesperman, expert on SEALS counter-terrorism John Weiseman, and the cool author of the CIA’s secret “Tourism Department” Olen Steinhauer. The British contingent is former spy chief Stella Remington, Robert Wilson (mentioned above) and John Lawton, creator of the Troy MI6 stories of the post-war period. A strong line-up then.

A good portion of the stories are historical dealing with military involvement in overseas entanglements where the business of spying on the other side or deception comes into its own. For me the writers suggest unease at the entanglements, much as one would expect from the majority view of modern America. Charles McCarry contributes a very elegantly written story set in Africa during the 1950s. Stephen Hunter spins a good World War II yarn about commandos being dropped behind the Nazi lines to take a bridge prior to D-Day. Good feel for action and authenticity. Dan Fespermann tells a believable tale of OSS recruiting airman as couriers to deceive the Germans about invasion plans. John Lawton provides a story about spying and scandal in England in the early 60s that’s surprisingly funny and has some nice twists. It tells of a low-grade army officer who tries to improve his career but by change stumbles into a Russian honey trap. Strong period atmosphere and entertaining stuff.

The present day stories are either the ‘spy as your neighbour’ or post 9/11 subterfuge. Stella Rimmington’s character study in “Hedged In,” another fear-thy-neighbor story with an unsympathetic narrator who misreads his wife’s behaviour and stumbles into an undercover op. Jo Finder’s piece is also about the guy next door. Quite an entertaining little piece about suspicion.

Turning to the clutch present-day post 9/11 stories, the most political and one of the strongest,is Robert Wilson’s about the troubles of ageing spy Roland Schafer. A career agent, moved to private black ops and then to interrogation – seemingly for the money to top up his pension after three marriages, he is being tailed by other agents (read mercenaries, when he is picked up and bedded by an attractive young woman. They met again and he gradually reveals that he came back to Hamburg to atone for his sins. Another mystery is that she dresses provocatively and has lots of older men to her apartment. Only at the end do we discover why. The pace is injected by those watching and waiting to eliminate them. At the end he feels deep remorse and upset at what his adopted country – the United States – has done under the Bush administration. A political piece but its power is the sustained build and emotional impact.

David Morrell’s “The Interrogator” is another cleverly plotted story of the ethnics and techniques of interrogation. It’s contemporary with rendition and water-boarding in the storyline, yet the pull is the comparison between these crude, so-called fast methods, and quasi-scientific psychological techniques. Which is the more reliable? Here Morrell cleverly introduces insights from the disinformation ops in the 1960s when the Soviets caused paranoia and upheaval in the CIA. How do you know how many layers to peel to get to the truth?

The final story is Olen Steinhauer’s about a sting op to take out a splinter group from Al-Shabaab through a computer bomb. The story develops through the viewpoints of four different characters – two American, two African. It is a complex and absorbing read. It allows the human and ethical side of the characters to give insights into the unfolding narrative; as such Steinhauer gives the genre both intellectual and emotional appeal. He is particularly adapt at describing situations that have a variety of meanings, which is most appropriate as his material delves into a range of perceptions, clashes of ideologies and beliefs about freedom and so on. This also underscores the difficulty of knowing what is going on, and what does it all add up too. Here is a passage that illustrates this:

“When you’re being watched, all your actions, however small, take on a presence of their own – each has its own significance and its own variety of interpretations. You light a cigarette, and that might mean that you’re nervous, you’re relaxed, you’ve been co-opted by Western forms of decadence, or that you’re desperately stopping time in order to invent your next lie”.

All in all, many readers will be impressed with the collection of new stories. Yes, I think spy fiction is back. Some writers prefer the historical approach, others give a more contemporary, slightly creepy sceptical take. Nevertheless, character, motivation and clever plots are the given’s for both. Enjoy