American literary writer Robert Stone has passed away aged 77. He wrote only eight novels in fifty odd years. Yet they had the intellectual depth and power to illuminate that his readers felt they were with a kindred spirit. His books interested those that had read the Beats, and the counter cultural writers such as Jack Kerouoc. They were looking for something anti-establishment and with stories that understood the dangers and ambiguities of the global reach of the American Colossus. Whether it was gun runners in Latin America, the drug-fuelled war on the Far East or religious fanaticism in the Middle East, Stone had a sensitive and moral weave to his narrative in his dangerous worlds.

The awards that Stone seemed to gather and the respect of other writers all helped his status as a collected author. The fact that he did not publish much made his earlier work all the more sought after. I was introduced to Robert Stone’s books by a collector when I stayed with him in Chicago in the 80’s. He said he had found a nice copy of the first edition of Dog Soldiers in the back of a thrift shop. He suggested that here was real writer and I should myself considering collecting him. Some twenty years later I attended a talk at the Cheltenham Festival. Robert kindly signed my collection. 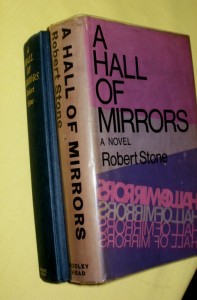 jacket for less than $200 or £130. For example, the American edition of A Hall of Mirrors (1967) has always been a prize possession and one will rarely see one offered below $300. However, the Bodley Head edition published in 1968 was mainly distributed to public libraries. As a new author the run was only 1000 copies. So after nearly fifty years finding even the British edition will be difficult.

Speaking of rare editions, the second novel Dog Soldiers (1974) is even more of a rarity in the British first edition – this time published by Secker & Warburg. To save on production costs this edition was made with sheets printed in the USA and the jacket is merely red stripes on a white background. I have only ever seen one copy which I bought in Norfolk about 20 years ago. Even those that have asked book scouts to find a copy have been unsuccessful.

The third novel, Flag for Sunrise (1981) has been more readily available in both editions. However, the next one, 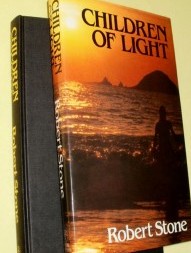 Children of Light (1986) – title taken from the Robert Frost poem – is an interesting one. The American edition was printed in reasonable numbers and Stone toured around to sign a good amount. The British Andre Deutsch edition again was sent mainly to libraries but the run was reportedly 4500 this time. What made this important for collectors was that this British printing preceded the US one by a week or so. American collectors wanted the British edition and only a few hundred copies are likely to have found themselves into the market.

Added to the rarity of several of the Robert Stone books is that, to my knowledge, he only made one appearance in the United Kingdom to promote his books. So signed copies of the British editions and indeed the high spots in any first edition is a must have for his collectors.

Thanks to my late friend from Chicago I am the proud owner of a Robert Stone collection. I have some spare signed copies of several books in the shop including the Andre Deutsch Children of Light.