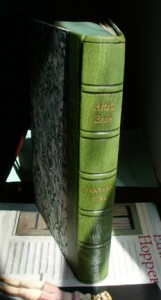 Deluxe copy 1/20 only. Writing as Barbara Vine Ruth Rendell has published 15 of the most outstanding multi-layered crime novels of the last 25 years. They are read and re-read for the pleasure they give. This is one of her best with an appreciation by her champion the late Julian Symons.

he alter ego of the prolific and gifted crime writer Ruth Rendell Having pushed the boundaries of the police procedural with her Wexford books and produced a string of sexgrills and psychological thrillers, she felt the need to move into new territory with books that offered rich and intriguing character studies and had detailed background research. Rendell had already charted the path with novels of urban alienation and suburban dysfunctionally – the Vine books allowed her space to expose this as cemented in sex and class divisions and to build a more informative backdrop – well beyond the classical detective formulae.

The esteemed crime critic, writer and past President of the Detection Club, Julian Symons had long advocated that Ruth Rendell was in range and power the novelist of her time. In his appreciation he speculates as to the reasons she adopted the pseudonym and gives a loving account of her best books. He says that he is reminded of Wilkie Collins and in Asta’s Book we have a murder mystery buried in the past. Susan Rowland, an expert on detective fiction called it an “extraordinary Vine novel” and noted that Ruth Rendell/Barbara Vine “turns detective fiction into a socially progressive form” by making restorative justice a “future orientated desire, not the society of now or the past”. These comments are from British Crime Writing: an encyclopedia edited by Barry Forshaw. Forshaw himself, another highly experienced aficionado of crime noted that: “Asta’s Book is a study in betrayal, personal identity, and of course, murder. Like all the Vine novels … this is psychological crime writing of the most fastidious kind, always idiosyncratic in its treatment of character”. (from the Rough Guide to Crime Fiction).

Plot summary: 1905. Asta and her husband Rasmus have come to east London from Denmark with their two sons. With Rasmus constantly away on business, Asta keeps loneliness and isolation at bay by writing her diary. These diaries, published over seventy years later, reveal themselves to be more than a mere journal, for they seem to hold the key to an unsolved murder, to the quest for a missing child and to the enigma surrounding Asta’s daughter, Swanny. It falls to Asta’s granddaughter Ann to unearth the buried secrets of nearly a century before.   From the 1994 Penguin paperback edition

The Scorpion Press edition comprised 99 numbered and signed copies.  The copy  is one of the few deluxe lettered state, one of 20 with five raised bands and issued privately. It is signed by Ruth Rendell and Julian Symons.  A rare collectible. 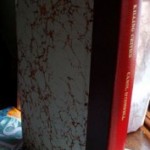 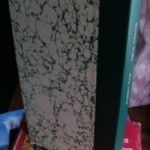