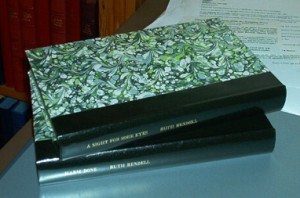 Ruth Rendell will always be treasured for her outstanding contribution to crime fiction. It is not always recognised that her writing pushed the boundaries of crime further and she inspired many to follow her into crime writing, such the late Michael Dibden and Val McDermid. This is a much loved Inspector Reg Wexford story and our signed edition contains an appreciation by the author of “Wire in the Blood” and other crime series, Val McDermid.

Ruth Rendell began her esteemed Wexford police procedural series with From Doon to Death (1964). Her output has been prolific, high quality and its subject matter increasingly exposed important social concerns. Ruth kept her work fresh by alternating between Wexford and the Kingsmarkham setting and the blacker urban psychological thrillers, and from the 80s her deeper more expansive, Barbara Vine novels. The Inspector Wexford books were however, her first work rooted in the classical detective story.

“The interplay between the central character, Wexford – senior in years and rank, pragmatic, yet imaginative – and (Mike) Burden -straight-laced and somewhat inflexible – is an important attraction of these works. Their acerbic comradeship, both personally and professionally fulfilling, brings each man vividly to life, and their relationships with their families supply wide ranging complications and subplots.” [Twentieth Century Crime & Mystery Writers, third edition]

In Road Rage (1997) Inspector Wexford’s wife Dora has been taken hostage and he fears for her life. He must confront the nibbyism issue of the construction of a new road in Kingsmarkham. Dora happens to be actively engaged in opposing the construction, so much so that she is kidnapped. It is up to Wexford to unravel all the knots in this case, and to try to stay as professional as possible in so doing. The kidnappers have threatened to kill their hostages if their demands are not met. Wexford and trusty assistant Mike Burden are put to the test in this thriller.

The prolific Scottish writer Val McDermid began writing crime novels in 1987. She found inspiration in Ruth Rendell’s outstanding achievements to extent her own ambition and reach as a writer. Here she says that “no-one can equal her range or her accomplishments; no-one has earned more respect from her fellow practitioners”. 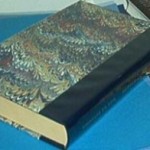 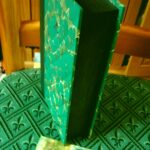