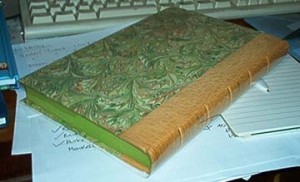 Jonathan Gash, much loved author of the Lovejoy sleuthing series appears in his only signed limited edition. This is the deluxe lettered state with five raised bands on biscuit harmatan leather and the additional signature of H R F Keating.

Jonathan Gash was as a lad a runner on antique market stalls. When he was older he attended college and became a doctor of tropical medicine. The market stall antics of passing on wares to the right customer staid with him later in life when he became a crime writer. The long-running Lovejoy series is known for its cast of roguish characters and the schemes they get up to. Lovejoy is a “divvy” or one that can discern who is genuine from the fake items that seem to flood the market.

The BBC ran a highly popular television adaptation with Ian McShane in the lead. Lovejoy, a bachelor, prefers the company of his dealer friends when he is not drawn into the arms of a pretty female; these tend to manipulate his better judgement, resulting in distrust and a little tantrums. Not so much murder and mayhem, as antiques and antics, as H R F Keating observed in his appreciation. Hence, this books title.

This is the deluxe lettered edition – the ordinary numbered are long since gone – with five raised bands on biscuit harmatan leather and the additional signature of H R F Keating to that of the author. 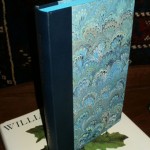